In this chapter we see how the material covered in Chapters 6-9 leads to an online presentation. Terminology for online course design varies. We will begin be reviewing the terms we use and how we use them.

The Presentation: Introducing and Reinforcing Knowledge

The difficulty in identifying the necessary and sufficient “atoms” of meaning that are common to all members of such broad categories as, say, chairs or tables, has led some theorists to question the view that word meanings are the combination of a finite number of semantic features. Moreover, word meanings are often quite “fuzzy” at the edges, with the meaning of one word “leaking” into the meaning of different but related words. In one famous experiment, the sociolinguist Labov asked informants to name various containers.

“They not only disagreed with one another over bowls, cups and vases, but were inconsistent from day to day. Certain shapes were clear in instances of particular containers, but others varied: something might be a bowl when full of potatoes, but a vase when it held flowers” (Aitchison, 1997, 65). 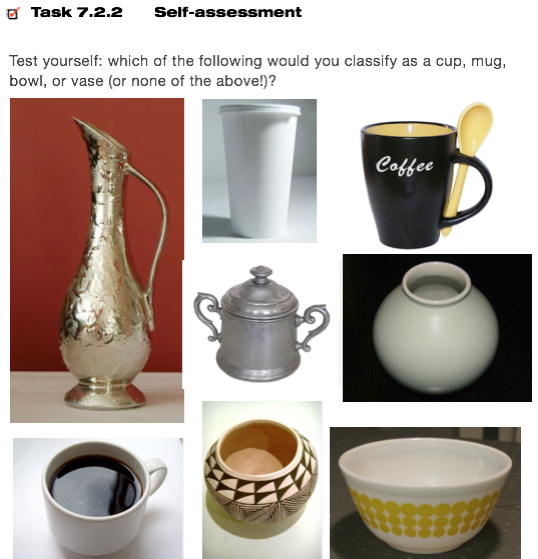 From the above activity, it should be clear that we don’t rank all examples of a category as being equally representative. Some examples are more “typical” than others. Prototype theory argues that we understand the meaning of a word by reference to these typical – or “best” – examples. These best examples are used by the mind as a way of assessing whether marginal or doubtful examples belong to the same category. As Schmitt (2000) points out, our notion of what might be a best example of a category is partly culturally determined:

Rosch (1975) found that people within a culture tend to have a relatively uniform idea of what the best examples are. For instance, Americans considered robins to be the best example of a bird, because robins represent the attributes people most commonly associate with birdiness: for example, flying, laying eggs, building nests, and singing. When compared to robins, penguins and ostriches had enough of these ‘birdy’ features to be considered birds, although not typical ones. Although bats fly, they did not have enough other features to be considered birds (p. 25).

What – to you – is the “best example” of the following categories? How might your choice differ from that of a person from another culture that you are familiar with?
1. flower
2. vegetable
3. vehicle
4. dwelling
5. sport
6. woman’s clothing
7. musical instrument
8. profession

DIY – Do it Yourself

Building the Course in the LMS

You may also want to look at…

On this site, you’ll get ideas that will help you develop action-packed learning materials for working adults. It’s written by Cathy Moore.